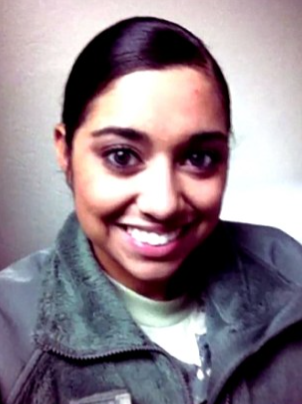 Army soldier Pfc. Karlyn Ramirez, 24, of Fort Meade, Maryland was found shot to death in her home on August 25, 2015 while she lay next to her newborn baby. Karlyn worked for the National Security Agency (NSA) and had a top secret security clearance. Investigators looked to her roommate and her husband as persons of interests. The media speculated that maybe this crime had something to do with her job. The Anne Arundel Police Department and the Federal Bureau of Investigation worked jointly to solve Karlyn’s homicide. A $20,000 reward was offered for information leading to the arrest of a suspect. More then a year later on October 6, 2016 Karlyn’s husband Army Sgt. Maliek Kearney and his new girlfriend Army veteran Dolores Delgado were arrested for the murder. In testimony, Sgt. Kearney admitted to shooting Karlyn four times, placing their baby in her dead mother’s arms, and then fleeing the scene leaving a sliding glass door open. Investigators report that the crime was a well thought out and executed plan implemented in an effort to throw homicide detectives off.

Dolores Delgado gave Sgt. Kearney the car, the gun, and gas cans to refuel with so he wouldn’t be caught on any security cameras as he drove from South Carolina to Maryland on August 24th to carry out the murder. Sgt. Kearney returned back to work the next morning at Fort Jackson in South Carolina to establish an alibi. Additional testimony revealed that Karlyn and Sgt. Kearney separated only two weeks after they had been married. They had been married for roughly five weeks when Karlyn was murdered. Karlyn attempted to get a restraining order on Sgt. Kearney just days before the murder after he showed up to her home unannounced in an effort to reconcile with her. After the failed attempt at reconciliation, Sgt. Kearney was hospitalized because he tried to end his life with sleeping pills. Sgt. Kearney was a decorated Army veteran of 15 years who had served tours in Iraq, Pakistan and South Korea. One of Sgt. Kearney’s superiors at Fort Sam Houston testified that he has been “nothing but an exemplary soldier.” A friend reported that he had no idea that Sgt. Kearney and Dolores Delgado were even dating. Sgt. Kearney  and Dolores Delgado are being prosecuted by the federal courts because they crossed state lines to execute a murder in another state. The U.S. Magistrate denied bail for Sgt. Kearney and Dolores Delgado and ordered they be transferred to Maryland to await trial. In August 2017, Dolores Delgado plead guilty to helping Sgt. Kearney with the murder of Karlyn Ramirez. On November 30, 2018, Maliek Kearney was sentence to life in federal prison with no parole for premeditated murder.

“He is sick and depraved. Slightly laughable was his compassionate transfer to San Antonio to be close to the child he put in her dead mother’s arms.” -Assistant U.S. Attorney Sarah Wannarka

Anne Arundel County police have identified a woman whose body was found at a home in Severn. -WBAL-TV 11 Baltimore (August 27, 2015)

Karlyn Ramirez, 24, was killed in her Maryland home. When police found her, she wasn’t alone. But the only living witness can’t say who killed her. -True Crime Daily (March 8, 2016)

Karlyn Ramirez, 24, was killed in her Maryland home. When police found her, she wasn’t alone. But the only living witness can’t say who killed her. -True Crime Daily (March 8, 2016)

24-year-old Karyln Ramirez, an army private stationed at Fort Meade, was found shot to death in her Severn home. Now, more than a year later, authorities make a big break in the investigation. -WJZ (October 10, 2016)

A military mom with top-secret security clearance is gunned down in her Maryland home on August 25, 2015. Who killed 24-year-old mother Karlyn Ramirez, and why? -True Crime Daily (December 15, 2017)

A former girlfriend took the stand Wednesday in the trial of Army Sgt. Maliek Kearney, who is accused of fatally shooting his estranged wife in 2015. Kearney, 37, faces federal charges in the killing of Karlyn Ramirez, of Severn. Delores Delgado struck a plea deal last summer and pleaded guilty to the federal crime of crossing state lines to commit domestic violence that resulted in Ramirez’s death. The plea was in exchange for federal officials not seeking the death penalty. -WBAL-TV 11 Baltimore (July 18, 2018)

The mistress of Army sergeant charged in the death of his estranged wife testified Thursday about the plot to kill the Fort Meade soldier. Dolores Delgado testified she “lied to give him an alibi.” -CBS News (July 20, 2018)

The case against a U.S. Army sergeant who is charged in connection with the fatal shooting of his estranged wife resumed Monday with Delores Delgado back on the witness stand. She is the mistress and co-conspirator of Sgt. Maliek Kearney. -WBAL-TV 11 Baltimore (July 30, 2018)

Former Army Sergeant Maliek Kearney has been sentenced to life without parole Friday for the 2015 murder of his wife in Anne Arundel County. -WJZ (November 30, 2018)

A federal judge sentenced Army Sgt. Maliek Kearney to life in prison without possibility of parole plus 10 years, in the 2015 killing of his estranged wife. In August, a federal jury found Kearney guilty in the killing of Karlyn Ramirez. Prosecutors called Kearney a cold-blooded, callous murderer who executed his estranged wife. -WBAL-TV 11 Baltimore (November 30, 2018)

She had top security clearance from the U.S. military and was only 24 when she was found dead at home, her 5-month-old daughter by her side. Who would want Karlyn Ramirez dead and why? -Investigation Discovery (September 20, 2018)

Andrea Canning reports on the homicide of private first class soldier and young mother Karlyn Ramirez. Canning also takes a glimpse into the FBI’s crime lab and an in-depth look at how multiple agencies uncovered a plot that spanned several states and prompted suspicions of espionage. -Dateline NBC (January 9, 2019)