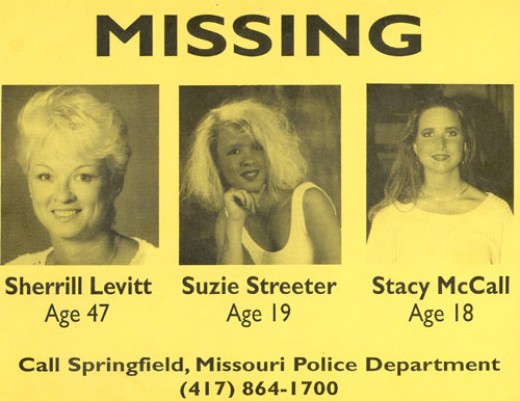 Sherrill Levitt, Stacy McCall, and Suzanne Streeter disappeared from Sherrill’s Springfield, Missouri home on June 6, 1992. ‘The Springfield Three’ were spending the night together and when the home was inspected there didn’t appear to be a struggle of any kind. It’s as if the three women just vanished, which still gives the families hope, despite the harsh reality they were probably the victims of foul play. Army veteran Robert Cox was named a person of interest in their disappearance. In California, Cox pleaded guilty to kidnapping and assault with a deadly weapon and was sentenced to nine years in prison and dishonorably discharged from the Army. After his release, Cox was convicted and sentenced to death in 1988 for the 1978 murder of Sharon Zellars in Orlando, Florida. But in a rare ruling that conviction and death sentence was overturned in 1989 due to lack of evidence. After released, Robert Cox moved to Springfield, Missouri where he coincidentally worked with Stacy McCall’s father. But there was no evidence linking him directly to ‘The Springfield Three’ disappearance, therefore he was never charged with any crime. In the meantime, Cox was arrested in Texas for aggravated robbery and it was while he was in custody that he declared he believed ‘The Springfield Three’ were dead and whoever did it was someone who knew what they were doing. To this day, the three women are still missing and no one has been charged with any crimes. If you have any information that could help solve this mystery, please contact the Springfield Missouri Police Department.

June 6, 1992 – Stacy McCall, 18, graduates from Kickapoo High School in Springfield. She meets her friend Suzie Streeter, 19. The two plan to travel to stay in Branson overnight. McCall phones her mother to say she and Suzie will be staying at a friend’s house in Battlefield. They left the home and decided to spend the night at Suzie’s home at 1717 E. Delmar St. -KY3 News (June 3, 2010)

Looking back 21 years of The Springfield Missing Three -Ozarks Sentinel

What happened to Stacy McCall, Suzanne “Suzie” Streeter, and Sherrill Levitt? These three women vanished in Springfield, Missouri in 1992, after Susie and Stacy attended a graduation party. Crime Watch Daily’s Kim Goldman is determined to find out what happened to them. -True Crime Daily (Part 1)

June 6th, 1992 was an important day for the seniors at Kickapoo high school, Missouri. After years of hard work, it was finally graduation, a time of excitement and uncertainty, the future full of promise. But for Suzie Streeter and Stacy McCall the night would end in mystery, when they and Suzie’s mother Sherrill seemingly vanished into thin air. This is the story of the Springfield Three. -Case Remains

The Following Is A True Crime Documentary Based Off The Unfortunate Disappearances Of Three Women In Springfield Missouri. -Skinned Locus

Where are the Springfield Three? -Vanished Without a Trace -Shauna Rae

The Tragic Case of Gina Clark & The Springfield 3 – Without a Trace -Creepypasta.com

Preview: June 6, 1992, hours after their graduation, Stacy McCall, Suzie Streeter and her mother Sherrill Levitt go missing without a trace. They are later dubbed, “The Springfield Three”. -Disappeared, Investigation Discovery

Preview: More than 15 years after the disappearance of “The Springfield Three”, clues to their location may lie beneath a parking garage at Cox Hospital. Will investigators find the answers they need to bring the missing women home? -Disappeared, Investigation Discovery