Army Sgt. Jacqueline Anderson, 26, was found dead in her apartment in Seoul, South Korea on July 31, 2016. Sgt. Anderson’s husband, Sgt. Carl Anderson, found her unresponsive and asked neighbors to contact the police but she was dead upon their arrival. Sgt. Anderson was from Leesville, Louisiana and she joined the Army in January 2011. She was assigned to Headquarters and Headquarters Battery, 1st Battalion, 38th Field Artillery Regiment, 210th Field Artillery Brigade at Camp Casey, South Korea. She was stationed in Dongducheon with her husband who is also with the 210th Field Artillery Brigade. At the time of reporting, Jacqueline’s cause of death was under investigation by the Army Criminal Investigation Division. The outcome of the investigation and official cause of death is unknown.

Steensland said his client is a disabled veteran of the U.S. military: “It’s my understanding he’s 100 percent disabled, and diagnosed with PTSD,” Steensland said. “I believe he served a 15-month tour in Iraq, and served approximately eight years in the Army.” Read more from Dothan Eagle here.

The Lackland Air Force Base sex scandal erupted in the 2011/2012 time frame. Sig Christenson, a reporter from San Antonio Express, slowly began to reveal the sex scandal issues at the basic military training facility in Texas and reported on most of the courts martials initiated by the Air Force. As a result of the escalating media coverage and other forces at play, it gave military sexual assault advocacy organizations a reason to request hearings in front of the House Armed Services Committee. Congressional hearings were held on January 23, 2013.  Both General Edward Rice and General Mark Welsh testified at this hearing along with two retired Air Force women and Dr. David Lisak. In the end, 35 Basic Military Training personnel were courts martialed for allegedly abusing trainees or sex related offenses. Now that the dust has settled and some time has passed, whistleblowers have disclosed that the Air Force investigations trampled on due process rights. And individuals were railroaded with collateral charges which forced them to take plea deals to avoid excessive punishments. Two were found guilty of rape and sentenced to twenty years. The Air Force is being accused of going on a “witch hunt” after being politically motivated to clean up the basic training facility while under the watchful eye of the media, advocates, and Congress. This post was inspired by Never Leave an Airman Behind: How the Air Force Faltered & Failed in the Wake of the Lackland Sex Scandal by Lt Col Craig Perry, USAF Retired.

END_OF_DOCUMENT_TOKEN_TO_BE_REPLACED 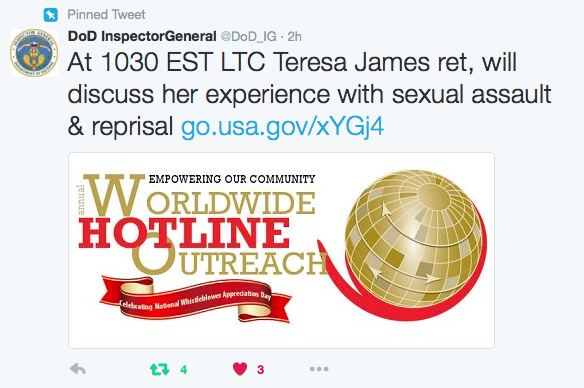 The Department of Defense Inspector General’s office held a Worldwide Hotline Outreach Conference today July 28, 2016. One of their keynote speakers was Lt Col Teresa James, US Army, Retired, highlighted before on this site. The DoD IG twitter feed shared excerpts from her presentation summarized below. As she spoke, I tweeted with them to bring awareness to the specifics that Lt Col James noted and why they are so important. For a complete listing of the tweets by the DoD IG, please visit their Twitter feed here.

END_OF_DOCUMENT_TOKEN_TO_BE_REPLACED 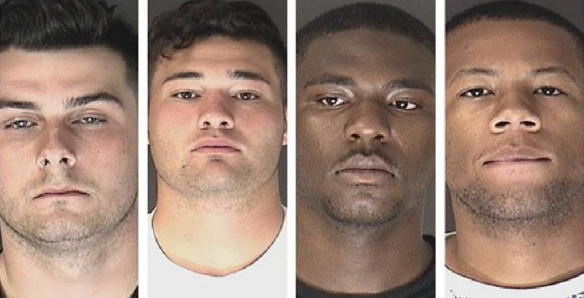 Just got off the phone with Hillary. I’m honored to be her running mate. Can’t wait to hit the trail tomorrow in Miami!

Hillary Clinton picked Senator Tim Kaine of Virginia as her Vice Presidential running mate. What is interesting about this pick is at one point in a Time magazine article in 2014, Clinton showed public support of the Military Justice Improvement Act, yet she chooses Senator Tim Kaine (D-VA) as her vice presidential running mate who has been blocking the bill since 2013. Of course Senator Angus King (I-ME) endorses this choice since he too has been blocking the due process bill sponsored by Senator Kirsten Gillibrand, Senator Susan Collins, Senator Rand Paul, Senator Ted Cruz, and many other bi-partisan Senators advocating for constitutional rights for military personnel and veterans.

“The move was surprising in that it means that if she becomes President, the normally hawkish Clinton would go against the advice of military brass and remove the cases from the chain of command. It also must have had a little bit of a silver lining dig at McCaskill, who endorsed Barack Obama over Clinton in 2008.” ~Time (2014)

END_OF_DOCUMENT_TOKEN_TO_BE_REPLACED

Air Force 1st Lt. Anais Tobar, 25, of Miami, Florida died from a non-combat-related injury on July 18, 2016 in Abu Dhabi, UAE. She was supporting Operation Inherent Resolve on behalf of the 4th Aircraft Maintenance Squadron at Seymour Johnson Air Force Base in North Carolina. The Miami Herald reported the Air Force Office of Special Investigations (AFOSI) was investigating the circumstances surrounding her death. The official cause of death is unknown.

“We are looking at spending over $600,000 of tax payer dollars for $2,000 that was allegedly stolen, most likely over 3-6 years ago, under a program that was deemed to be flawed, mismanaged and inherently opaque by the US Army’s own leadership.”

It is true, that our forefathers set out to create a judicial system that blindly judged the accused in a manner that afforded them the opportunity to receive a fair trial, regardless of race, sex, beliefs, political stature or societal standings. However, as shown in the Guard Recruiting Assistance Program (G-RAP) scandal, it appears today’s judicial system is more about your ability to secure good lawyers and your civil status than it is about determining guilt versus innocence.

Most soldiers charged for their participation in G-RAP cannot afford an attorney. They are bullied by Army Criminal Investigative Command (CID) Agents to take polygraphs, provide incomplete statements (which are then used as evidence against them) and to accept a plea for criminal acts they did not commit. Without adequate counsel these service members are given ultimatums or forced to accept deals that leave them powerless. At best they are issued overworked public defenders who place them in a pool of other criminals including rapist, murderers and thieves. Soldiers are pushed to take plea bargains by the prosecution in an effort to give CID a quick victory and take the case off the public defender’s plate. However, this system puts a hefty burden on the soldier regardless of what road they take.

END_OF_DOCUMENT_TOKEN_TO_BE_REPLACED

Army Spc. Alexander Johnson, 21, was found dead near the Belton Lake Outdoor Recreational Area’s paintball court at Fort Hood on July 12, 2016. Spc. Johnson’s home of record is listed as Mulberry, Florida and he entered military service in July 2013. Spc. Johnson was an AH-64 Apache attack helicopter repairer assigned to the 615th Aviation Support Battalion, 1st Air Cavalry Brigade, 1st Cavalry Division at Fort Hood. At the time of Spc. Johnson’s death, Fort Hood officials indicated the incident was under investigation. The circumstances surrounding his death and official cause of death are unknown.

On July 8, 2016, Army soldier Spc. Dhaifal Ali of Fort Campbell, Kentucky was swept away by a creek current on the post. Spc. Ali was at the creek with two other Army soldiers, one of them was Sgt. Marcus Rogers, who was baptizing him. The Emergency Management Agency reported that the creek had been swollen from heavy rains and severe storms; Dhaifal Ali’s body was recovered several days later and his obituary lists the date of his death on July 12, 2016. On September 6, 2016, Fort Campbell reported that they were investigating the circumstances surrounding Ali’s ‘accidental death.’ MJFA received notification this month that Sgt. Marcus Rogers had an Army hearing to determine his culpability in Ali’s death. An Instagram update on December 15, 2016 revealed that Sgt. Rogers was demoted one rank from SSG to SGT as a result of his involvement in the accidental drowning of Spc. Ali. Sources reveal on YouTube that Sgt. Roger’s failed to follow military orders when he took Spc. Ali to the creek which was off limits.

Pictures posted on Facebook by a fellow soldier show he was there to be baptized. -News Channel 5 (September 6, 2016)

Pictures posted on Facebook by a fellow soldier show he was at there to be baptized. -News Channel 5 (September 13, 2016)

MILITARY JUSTICE FOR ALL
Powered by WordPress.com.