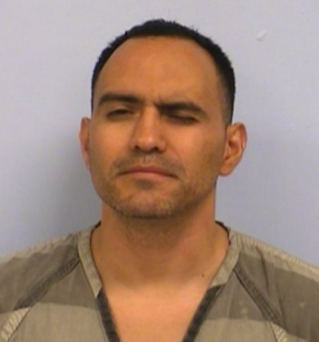 Army veteran Jacques Garcia, 38, is accused of shooting and killing Manuel Trejo, 41, in a parking lot in Austin, Texas on March 28, 2015. Garcia has been charged with first degree felony murder and a third-degree felony of evading in a motor vehicle. Garcia’s bond for the murder charge was set at $250,000 and $20,000 for the evading arrest charge.

Police say “it is clear that Garcia is well-trained in the safe use of firearms.” -KXAN

ID Go: Shortly after Chris Coleman starts a new job as Security Chief for a Christian ministry, he begins receiving threatening emails. Then, tragedy strikes: his wife and two sons are found dead. Police must work to trace the emails back to the killer. -Hate Mail, Web of Lies (S2,E11)

Date: May 5, 2009
Victims: Sheri Coleman, Air Force veteran, Garett Coleman, Gavin Coleman
Offender: Chris Coleman, Marine Corps veteran
Location: Waterloo, Illinois
Circumstances: Devout Christians, rushed to get married because Sheri was pregnant, moved to Waterloo, Illinois after getting out of the military, Chris got a job as head of security for Joyce Meyer, Joyce attracted extreme fanatics, Chris monitors e-mails and hate mail for Meyer, paid $100,000 a year, Joyce travels the world and Chris goes with her, unrelenting schedule that keeps him away from home, Chris was gone 260 days out of the year, Chris starts getting threatening emails at work, threats escalate to include harm to Chris’ family, neighbor finds Sheri, Garett, and Gavin strangled to death in their Illinois home, investigation leads police to Chris Coleman, Chris wanted to end his marriage to be with a woman he was having an affair with, Chris knew Sheri didn’t want a divorce
Disposition: Sentenced to life in prison, no parole

Press conference in 2009 about the triple murder of Sheri, Garett and Gavin Coleman in Columbia, Illinois. Their father Chris Coleman was convicted and sentenced to life in prison for the murders two years later. -Belleville News-Democrat (May 12, 2011)

Excerpt from the Chris Coleman interview. Coleman was convicted of killing his wife and two sons. This interview took place after the bodies were found in their Columbia, Illinois home. The evidence was released by the judge on July 7, 2011. -Belleville News-Democrat (July 8, 2011)

Angela DeCicco, mother of Sheri Coleman, talks about the civil suit. Her daughter and grandsons were murder by Chris Coleman. -Belleville News-Democrat (May 12, 2012)

Sheri Coleman and her two boys were found brutally murdered in a scene that looked like it was right out of the Manson Family Horror. They were strangled to death and someone spray painted over their bodies. Sheri’s husband Christopher, a bodyguard for a televangelist, claimed his family had been threatened prior to the murders because of his line of work, but was his family actually targeted for the job he held? -True Crime Daily (April 26, 2018)

Chris Coleman was convicted in 2011 of murdering his wife Sherri and sons, Garret & Gavin to death. -Crime Statement Analysis (November 26, 2018)

Convicted murderer Chris Coleman is back in a Columbia, Illinois court Tuesday. Ten years ago, Coleman was convicted of killing his wife and sons. Fox 2/News 11’s Kelley Hoskins is live in Waterloo with what was decided today during Coleman’s attempted appeal. -FOX 2 St. Louis (April 17, 2019)

Caleb Barnes, 20, US Army, of Fort Meade, Maryland admitted guilt in the stabbing death of Cheryl Silvonek in her car on March 15, 2015. Lehigh County prosecutor’s charged Barnes and his 14 year old girlfriend Jamie Silvonek with the crime. Barnes was charged specifically with criminal homicide, abuse of a corpse, and statutory sexual assault. He stood accused of killing his underage girlfriend’s mother who had expressed disappointment with the relationship and then burning and burying her body in eastern Pennsylvania. Caleb Barnes and Jamie Silvonek plead guilty to the homicide; Jamie Silvonek showed some remorse and apologized to the court yet Caleb Barnes expressed zero remorse. Barnes was sentenced to life in state prison plus 22-44 years. The judge accused him of  “blindsiding a 54 year old woman by stabbing her to death in a cowardly attempt to conceal his illegal sexual relationship with her 14-year-old daughter.”

Caleb Barnes gets life plus 22 to 44 years for the murder of Cheryl Silvonek. Unlike his former girlfriend Jamie Silvonek, he did not apologize for his part in the Upper Macungie woman’s killing. -The Morning Call

American soldier Megan Touma has left her husband for her lover Edgar. Turns out Edgar has a spouse of his own. When Megan gets pregnant Edgar must make a decision between two women. Someone will be left brokenhearted and someone will be left dead. -Love is a Battlefield, Scorned: Love Kills (S5,E2)