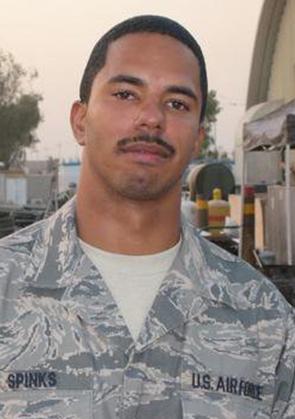 In 2004, Minden, Louisiana high school student Kimethia Coleman was the all American girl and everyone loved her. According to those who knew her, Kim was smart, personable, popular and dedicated to her studies. When Kim graduated, she decided she wanted to share her good fortune and become a social worker. For the next four years, Kim studied hard at college and got a job giving back to her community for the betterment of other people’s lives. Friends confirmed this is the way Kim was raised. She was altruistic and appeared much more interested in helping other people than earning a big paycheck. Across town, twenty-eight year old Brian Spinks was giving back to his community and his country. Brian enlisted in the Air Force after high school and was stationed at Barksdale Air Force Base in Louisiana. After two tours of duty overseas and almost a decade of service, Brian earned the love and respect of his fellow comrades.

In 2008, Brian Spinks’ life took a turn when he met Kim Coleman at one of many get togethers at his place in Shreveport, Louisiana. Kim was an unexpected guest and he was immediately attracted to this very pretty girl. Their relationship started out very strong and they appeared to be the perfect couple. Brian was really into her and even told one of his friends he wanted Kim to meet his family. Kim definitely thought she found Mr. Right and wanted to keep Brian as close as she could. As it turns out, Kim wanted to be with Brian 24/7 but quickly learned he didn’t feel the same way. Brian was your typical 20 something year old in the military who liked to go out with his friends and have fun. Kim was not used to being rejected. She was used to everybody always wanting her so suspicion quickly began to grow in Kim’s mind. Kim’s jealousy became a problem and it stalled the relationship just as it was getting off the ground.

Unprovoked, Kim went through Brian’s phone looking for evidence he was with other women. She was looking for trouble where there wasn’t any because she had a fatal attraction. Kim’s idea of loving Brian was completely possessing Brian. Kim had a lot going for her but she didn’t have control of her emotions. According to Profiler Candice DeLong, the story of Kim Coleman is a story of jealousy, a jealousy that destroyed everything in its path. Brian Spinks thought he was taking a break from Kim Coleman but the distance only created more problems. The more he pushed back, the more jealous she became. Kim was a very angry person when she realized Brian didn’t want to be with her anymore. On January 16, 2010, Kim tracked Brian down in a club and confronted him. Her jealousy bubbled over and she started a fight with another female she thought was interested in Brian. Kim was so out of control on this night, people had to hold her back.

Kim was always picking fights and arguments with other people and Brian was disappointed and sick of it. He asked his friends to take him home. It was the last straw for Brian and after a heavy night of drinking, he called Kim to end things permanently. She didn’t answer so Brian left a message on her voicemail telling her how embarrassed he was and that it was over. Kim didn’t get the message because she was on her way over to Brian’s place. When she arrived, Brian answered the door, told her the relationship was over, and asked her to leave. Kim had never felt that type of rejection before. She felt like she had been dumped and that never happened to Kim Coleman. Kim pushed her way in, retrieved a knife from Brian’s kitchen, and started stabbing him from behind. There was nothing Brian could do. Kim kept stabbing until she broke the knife she was using. She stopped and retrieved another knife from the kitchen. Kim Coleman stabbed Brian over sixty times.

Profiler DeLong cautioned that some would think Kim was completely out of control but she wanted to remind us that Kim was very much in control. She wanted to destroy Brian because he wanted to leave her. She was a women scorned in that moment and committed an unimaginable crime against someone who sacrificed and fought for our country. After Kim was done stabbing Brian, she needed to cover her tracks. She called the police and told them somebody stabbed her boyfriend. Kim probably thought Brian was dead when she called 911 but he wasn’t. The 911 dispatcher said Brian could be heard in the background asking for help and pleading for his life. Kim pretended to be concerned while he lay there helpless with the person who did this to him. The 911 operator then heard the most chilling sounds when Kim ended his life. The 911 dispatcher could hear a gurgle and then Brian went silent. Kim created a story about an intruder and stabbed herself a couple of times to make it look good.

Kim said someone followed her home and attacked both of them in the apartment, however the pattern of injuries didn’t fit the story. According to a medical examiner, if she had been trying to fend off an attacker, she would have cuts on the outside of her arms or on her hands as she was trying to push the knife away. And when the police discovered Brian’s voicemail, it was clear there had been a fight. Police knew they were looking at their killer and Kim finally admitted she killed Brian but claimed it was in self-defense. But Kim’s claims of self-defense didn’t add up either. Kim was charged with second degree murder. In court, Kim feigned mental illness but the jury saw right through it and knew Kim killed Brian in cold blood. In 2012, Kim Coleman was convicted and sentenced to life in prison without the possibility of parole. Profiler DeLong ended the program reminding us that unlike most killers, there was nothing in Kim’s background that foreshadowed the brutal murder of her boyfriend or the complete demise of her own life.

Preview: Kim Coleman had a lot going for her – except control of her own emotions. Her idea of loving Brian was completely possessing him. Love would never survive her suspicious mind. -Suspicious Minds, Deadly Women (S10, E8)

A social worker can’t keep the lid on her possessive nature, a friendship is destroyed by jealous delusions, and young love leads to a violent end.These Deadly Women just can’t walk out… and their love won’t survive their Suspicious Minds. -Suspicious Minds, Deadly Women (S10, E8)