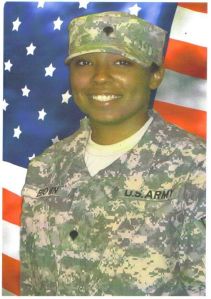 Army Spc. Seteria Brown, 22, of Orlando, Florida, died of injuries sustained in a non-combat related incident in Sharana, Afghanistan on July 25, 2008. She was supporting Operation Enduring Freedom on behalf of the 62nd Engineer Battalion, 36th Engineer Brigade in Fort Hood, Texas. At the time of the DoD press release, the incident was under investigation. The official cause of death and outcome of the investigation is unknown.

Rumors quickly circulated she committed suicide, but her family and friends don’t believe that. “The Army has not ruled anything yet,” Harris said. “They’re still investigating. They didn’t rule it suicide. They just said she was found in the barracks. The type of weapon she was shot with, a M16, is a tall weapon. It might even be the same height she is. It’s hard to shoot yourself with that. –Tuscaloosa News