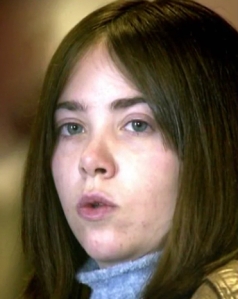 In 1999, 18-year-old Katrina Bridges and 21-year-old Chris Ingraham were head over heels in love. Chris was the all American guy and he was in the U.S. Navy. He was the guy everybody loved to be around. It was a magical time for both of them that is until Katrina found out she was pregnant only three months after they began dating. Chris didn’t run away, he wanted to do the right thing, and he wanted to be a dad. Chris agreed to move to Maine from New York so Katrina could be close to her family. Chris needed to provide for the family so he got a job at the local Naval base as a clerk. Chris recognized he had a family and he was going to take care of them. The young couple had a supportive family including Katrina’s grandmother. But there’s something no one knew…Katrina had a serious problem. Cute little Katrina didn’t care who she took money from. And if she could steal from her own grandmother, she was capable of anything. Stealing was a bad habit Katrina had been doing for years. She stole from her school and family members in the past. Money was the object for her.

Katrina not only stole from friends and family but also the State of Maine. She received welfare benefits because she said there was no other income coming into the family even though Chris had a job. According to former FBI profiler Candice DeLong, compulsive thievery can be a sign of psychopathy and Katrina was a psychopath. DeLong explained that psychopaths steal because it makes them feel good, it’s a thrill, and they think they pulled one over on someone. The higher the risk, the more fun it is for them. And every time they get away with it, that buys them more time to steal something bigger and more valuable. Katrina’s life was all lies and she was a fraud. But one day, Katrina’s thieving ways were discovered. Her grandmother reported that some checks were missing and discovered Katrina had forged some checks and tried to cash them. Chris was appalled and when he confronted her, Katrina denied it. Chris reminded her that she stole from him, she stole from family, and he had enough.

Chris Ingraham didn’t know what to do; it was about money and trust. He was nervous about her raising their son because of some of the trust issues. He told Katrina that if she didn’t get professional help, he was leaving and taking their son with him. Chris gave her an ultimatum and this was most likely Katrina’s breaking point. Then one day, they got a knock at the door. It was a door-to-door life insurance salesman and this gave Katrina another option. When Chris got a life insurance policy for $15,000 that paid double indemnity in the event of an accident, Katrina saw a mountain of gold. So now there was a lot of money at stake. In Jonesboro, Maine on January 2, 2001, Katrina Bridges staged a robbery in her own home. Again, she was looking for money and she took some of Chris’ video games and sold them for a few dollars a piece. She called Chris at work and told him they had been burglarized. She told him they stole his shot gun and his video games. He told her to call the police…but she never did.

When Chris got home, he discovered that the shot gun was still there, no jewelry was missing, but the playstation games were gone. He knew that no one had broken into their home. He figured out that she took his games and sold them. He confronted Katrina and again she denied it. He told her he was done with her and the situation. The stage was set. Now Katrina had Chris exactly where she wanted him: defenseless and sound asleep. She didn’t have to go through with the murder but psychopaths are cool, calm and collected even when committing the most serious of crimes. She had no problem committing the murder, no guilt, no remorse, only nerves of steel. Katrina went into the marital bedroom and shot Chris once in the head while he lay asleep but the one shot didn’t kill Chris. Katrina attempted to shoot him a second time but the gun wasn’t working properly. So she just left him struggling for his life, took the child, and left the home. Now she needed to create an alibi. Katrina cut her hair and went to her mother’s house. She told her mother she was kidnapped by Canadian drug dealers.

Katrina said Canadian drug dealers broke into her house so she fled but was worried about what may have happened to Chris. The only reason for Katrina to cut her hair was to get rid of any blood smears or powder burns or powder soot that may have come from the gun when she fired it. Some ten hours after the shooting, Katrina finally went to the police. The police immediately went to the house to check on Chris and he was still alive and taken to the hospital; 24 hours later he died. Katrina told the cops there were two intruders and one of them raped Chris but the cops didn’t believe her story. Once Katrina realized her first story wasn’t believable, she changed her story and said Chris was depressed and he wanted them both to commit suicide. Now it was suddenly a murder-suicide pact. The police asked Katrina who pulled the trigger. Katrina said Chris wanted to commit suicide but he didn’t have the guts to do it himself and asked Katrina to do it. She put the gun to his head, she said she thought the safety was on, but then she pulled the trigger and the gun went off.

The cops arrested her on the spot because of her implausible stories and a history of lies, robbery, and Chris’ life insurance policy. It all pointed to her guilt. In 2003, Katrina Bridges was found guilty of murder and was sentenced to forty-seven (47) years in prison. Profiler DeLong summarized, “Katrina Bridges was cute, she was a pretty one, but she was pretty poison.” For Katrina, it wasn’t about the money, the lies and the thieving were fun. There were no indications Katrina had a drug problem, so what was she doing with the money? She didn’t need the money, she did it because it was fun but the consequences for those around her were devastating. Katrina Bridges was calculating, manipulative, secretive, and devious…and she’s right where she belongs.