Marine Corps veteran Laurel Chasmar, 28, was gunned down outside her Morris Plains, New Jersey apartment building in the early morning hours on August 5, 2017. Hassan Shahid, 32, of Jersey City, New Jersey is accused of her murder; he was found dead with a self inflicted gunshot wound in Morris township after fleeing the scene of the crime on foot when the police arrived. According to media reports, Laurel and Hassan were co-workers at one of the Novartis facilities where Laurel worked as a senior production support technician for the past couple of years. It appears Laurel dated Shadid for a brief period of time but she ended things and had recently complained several times to the police that Shadid was harassing her.

“A Morris Plains woman and former Marine Corps veteran who was slain over the weekend had complained to police about the former boyfriend who killed her. Kevin Coughlin of Morristown Green says Laurel Chasmar made several complaints to the police that her former boyfriend was harassing her.” –Gloucester City News (August 11, 2017)

The Morris Plains Mayor confirmed that Chasmar did at one point date co-worker Hassan Shahid at the pharmaceutical company, but Laurel had ended the relationship and made several recent harassment complaints against Hassan. The Mayor said Laurel stopped short of filing for a domestic violence restraining order, which the police advised her to do. Police believe Shadid ambushed Laurel when she arrived home. Shahid borrowed a car so Chasmar would not recognize him and while lying in wait, he sprayed more than a dozen shots from a .45 caliber handgun in the parking garage of her apartment building, hitting both parked vehicles and grazing Chasmar. Chasmar ran to the common entrance of her apartment building, but could not unlock the door in time and was fatally shot. Police heard the gunfire and when they arrived, Shahid ran accross the street and shot himself. This gun violence incident has been ruled a murder-suicide.

In a touching tribute from her alma mater, a memorial service for Laurel Rae Chasmar was held at Lenfell Hall on the Florham Park campus of Fairleigh Dickinson University (FDU) in Teaneck, New Jersey. MorristownGreen.com reports Laurel served in the U.S. Marine Corps from 2007 to 2011 as an administration chief and sergeant, and as a recruiter based at Camp Pendleton in California. After leaving the Marine Corps, Laurel earned an associate’s degree from the County College of Morris, where she was a member of the Phi Theta Kappa honors society. NJ.com reports Laurel earned a bachelor of arts degree in psychology at FDU and was scheduled to complete her master’s degree in business administration from the university in 2018. Laurel Chasmar was honored on the university’s FDU Veterans Facebook page on August 9, 2017.. 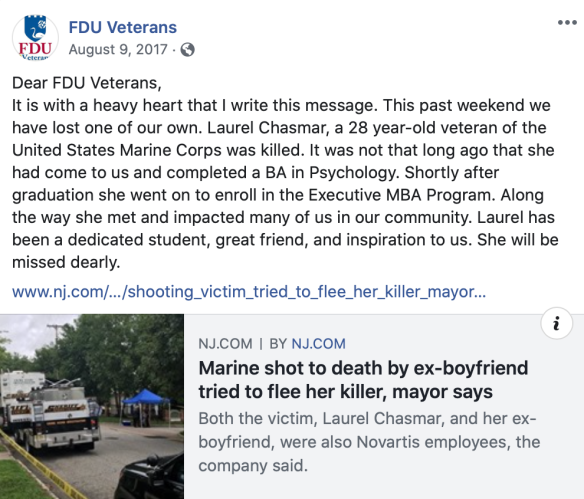