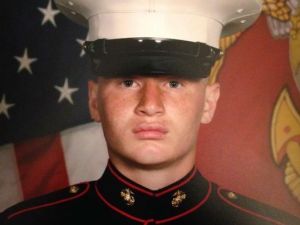 The 1st Marine Division announced in a news release Marine Lance Cpl. Cody Haley, 20, was doing routine physical training when he was struck and killed on August 4, 2017 by a falling tree at Camp Pendleton in San Diego, California. According to Cody Haley’s obituary, he attended school in Manly, Iowa until the 7th grade then moved to Eldora, Iowa where he finished his schooling. Cody graduated from South Hardin High School in May of 2015. The family said Cody decided that he wanted to follow in his grandpa’s footsteps and join the United States Marines Corps. Cody left for San Diego in August of 2015 to start his journey as a Marine at Camp Pendleton Marine Corps base. Cody began his career stationed at Camp Horno, a camp located within the confines of Camp Pendleton. Cody was then deployed with the 11th Marine Expeditionary Unit in October of 2016 aboard the navy ship, the U.S.S. Comstock, for a 7 month deployment. The Comstock is assigned to COMSURFPAC, Amphibious Group Three and is homeported in San Diego. He returned back to Camp Horno in May of 2017. Cody’s body was flown back to Iowa where he was laid to rest with full military honors.

And thanks to the love and generosity of many families, Cody’s entire Marine platoon was flown out to Iowa to attend his funeral. At the South Hardin H.S. football opener in 2017, Cody was honored and remembered in a loving community tribute to him and his family. One of his friends was quoted saying, “Haley was proud to be a mortar man and it’s a tight bond that we take very personally.” LCpl. Haley was one of two Marines to die in the month of August 2017 at Camp Pendleton. Cpl. Andrew West, 22, of Van Horne, Iowa was training at the San Diego base when he died in an off-site motorcycle crash on August 20th. Less than a month later on September 13th, a Camp Pendleton training accident sent fifteen (15) Marines to multiple area hospitals after their amphibious assault vehicle caught on fire. According to U.S. Marine Corps officials, eight of the Marines were taken to a burn unit at the University of California San Diego hospital. Of those eight Marines, three were in critical condition and five were in serious condition. Click here to read the 1st Marine Division press release update regarding the amphibious assault vehicle incident at Camp Pendleton.

Cody was born on October 21, 1996 in Mason City, Iowa, to his parents Jeff & Kim (Crowe) Haley. Four years later, he got the baby brother he had prayed for, his brother Colton. Cody was a mischievous little boy full of spit and vinegar, who grew up to be one of America’s finest. He loved hunting with his grandpa and with his dog Rowdy. Cody also enjoyed fishing, motorcycles and of course, his guns. He had many friends that he enjoyed hanging out with. He had a tough outer layer but was a softie on the inside. He was loved by many and will be dearly missed by all those he leaves behind. Click here for Cody Haley’s obituary.