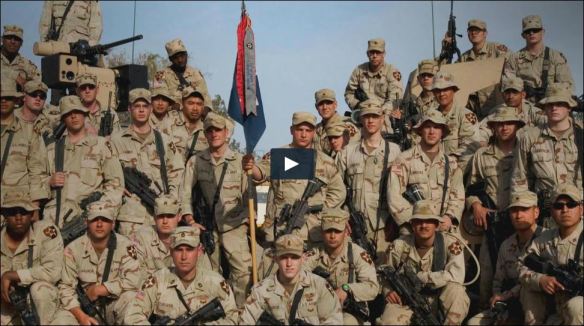 Day after day I hear first hand accounts of not only the Army but all of the Armed Forces forcing troops out for PTSD or some trumped up misconduct charge. And what really gets my goat is that these are people who have been in the military for a long time, have deployed overseas, and now suffer from some kind of war injury. Is this the way that you envisioned the military would treat our troops after all that they have sacrificed.

I find it ironic that Officers who get caught with felony charges can quietly retire after the media blows it up to hold them accountable. Yet a soldier who has been in 19 years, did four rotations overseas, and snapped on the fourth rotation because you sent them there knowing they had PTSD, gets the bad conduct discharge. This is criminal. How dare you Army do this to someone with 19 years of dedicated service. What happened to the whole person concept? Why is it that a fight or flight response is now being used against a soldier when the symptoms include disassociation, irritability, distrust, fear, etc. Why is it that you act like people are faking when they just did four tours of duty.

I am tired of hearing these stories and society not believing that it really is this bad. I knew that President Obama gave them at least one more year before they took military justice seriously so they could start booting anyone and everyone for their draw down. But in the meantime, they are betraying those who gave them everything which in turn will push a person to suicide. You don’t have their back. The military is not standardized at all in their endeavors for care for the soldier.

It appears that the military leadership are the ones that caused this to begin with. The Army knowingly lowered their recruiting standards to allow those with violent criminal histories to enlist, for the warfighting efforts. They also knowingly have been sending soldiers back overseas who have been diagnosed with PTSD and really shouldn’t go anywhere. Were they so hard up for manning that they were willing to risk everyone to recruit rapists in the ranks? Is it worth people killing themself because when they reach out for help, you belittle them, tell them to get over it, and then don’t give a damn in the end what the f*ck happens to them.

You people wonder why suicide rates are so high. It’s because of betrayal. Betrayal in the ranks and betrayal from leadership. Leadership won’t hear us when we try to tell them how their actions are impacting all of us. They just wanted us to shut up and do what we were told to do despite what the impact was on our well being or the mission. We really are casualties to them. I never realized how much until I started lobbying. All we are asking for is that every single military member be accountable for their actions. We need national standards for reporting crimes and abuse of power.

When I hear over and over and watch in The Wounded Platoon documentary that because the military, Army especially, does not offer adequate help for the soldiers returning home from war with PTSD, I just want to scream. If you don’t acknowledge the PTSD of course they are going to begin to drink to self-medicate, and then will show episodes of aggressiveness because their fight or flight is right on the edge. Why do these leaders not get this?

How could you possibly remove someone from the military with an other then honorable or unhonorable discharge after all that soldier has given you. If you would simply get them the help, it wouldn’t come to this. Instead, you guys are all battle warn, blowing it off because you gotta be tough. No, it takes courage to ask for help. And getting adequate treatment will prevent the PTSD from becoming compounded PTSD which is why our suicide rates are so high. If 23 troops and veterans dying a day isn’t a red flag, I don’t know what is.

I am so tired of you military leaders with all your patterns, damage control, politics, and empty words. And, Congress believes your crap despite years of evidence of failure. Why doesn’t anyone talk to the enlisted, the guy/gal who truly fights these wars then gets screwed because no one would help them. Of course a soldier is going to downward spiral if military leadership does not recognize that the troop has PTSD from fighting a war or getting raped by one of your recruits.

We get that this is all just an occupational hazard to you but I think the American public supports that if you break it, you fix it. Own that the toxic leadership, ego, and ignorance is contributing to the suicide crisis. Just get them the damn help they need, stop pushing them out after they gave you years of service and want to be there. And especially quit making up these fake conjured up charges that you use to toss them because then you don’t have to give them any benefits. That is criminal.

Every person in the military needs to be held accountable for their actions. Until we have someone on the outside to oversea that justice is conducted in a fair and judicious process, we will continue to see our dedicated, knowledgeable soldiers with PTSD get tossed and replaced with someone young and naive, who will eventually get PTSD too. We want real people who own their stuff. There’s nothing wrong with having PTSD from fighting a damn war overseas in Iraq or Afghanistan or wherever. Please treat them. That’s the least you could do for them. In the meantime, we will be working on ways to hold you accountable for this recklessness.