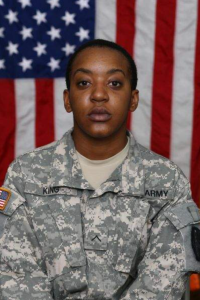 Army Private Janelle King, 23, died of injuries suffered in a non-combat related incident in Baghdad, Iraq on August 14, 2008. Private King was working as a combat medic stationed at Camp Cropper, a military detainee center near Baghdad International Airport, on her first tour of duty at the time of her death. Pvt. King was supporting Operation Iraqi Freedom on behalf of the 115th Combat Support Hospital at Fort Polk, Louisiana. At the time of the Department of Defense press release, the incident was under investigation. The outcome of the investigation and the official cause of death is unknown. Janelle was from Merced, California, she graduated from Rancocas Valley Regional High School in Mount Holly, New Jersey in 2003, and attended a culinary arts school in San Francisco, California before joining the Army in May 2007. Janelle’s father served in the active duty Air Force and she grew up as a military dependent.

“The eldest daughter of an Air Force official, King was born in Altus, Okla., and lived in California, Panama and Hawaii before graduating from Rancocas Valley Regional High School in Mt. Holly, N.J., in 2003. Brian King said his daughter’s death makes his own work in the Air Force harder at times.” –Los Angeles Times (October 26, 2008)