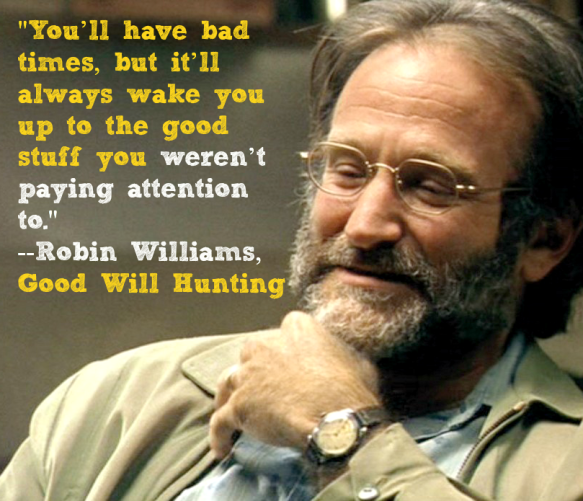 Robin Williams, the prolific Oscar-winning actor and comedian, died by suicide on August 11, 2014. He was 63. Read more from History here.

“From entertaining thousands of service men and women in war zones, to his philanthropy that helped veterans struggling with hidden wounds of war, he was a loyal and compassionate advocate for all who serve this nation in uniform,” [Chuck] Hagel said in a released statement. “He will be dearly missed by the men and women of DOD, so many of whom were personally touched by his humor and generosity.” -Stars and Stripes

Statement by the President on the Passing of Robin Williams found here.

Will (Matt Damon) wants to know what’s in his file, while Sean (Robin Williams) assures him that the abuse he suffered wasn’t his fault. -Miramax

“The most brilliant mind at America’s top university isn’t a student, he’s the kid who cleans the floors. Will Hunting is a headstrong, working-class genius who is failing the lessons of life. After one too many run-ins with the law, Will’s last chance is a psychology professor, who might be the only man who can reach him. Finally forced to deal with his past, Will discovers that the only one holding him back is himself.” –Miramax Official Site