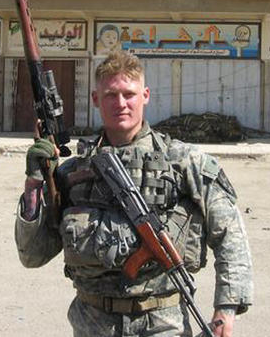 In March 2006, John Needham joined the Army making him the fifth generation in his family to serve in the Armed Forces. In the fall of 2006, John deployed with his team from Fort Carson, Colorado to fight the war in Iraq during some of the most intense combat in the war. Army private John Needham began to downward spiral about eleven months into a deployment to Iraq after surviving multiple IED and grenade attacks. He was injured both mentally and physically. John claims that when he reached out for help his Army command told him to tell the medical personnel that he was fine so he wouldn’t be sent home. John did what he was asked to do. Soon thereafter John began sending alarming e-mails to his family and learned that his deployment was going to be extended beyond the twelve months he was originally tasked with. In September 2007, John contemplated suicide and one of his fellow comrades stopped him but in the struggle the gun discharged. It was at this time that John’s leadership began to shame him and isolate him. They also assigned two soldiers to watch over him twenty-four seven. John felt that eventually his team turned on him as did his command, who recommended him for courts martial because of the incident with the gun.

John’s father became concerned about John’s health and after making numerous phone calls was able to get him sent to Walter Reed Army Medical Center. John spent one month in psychiatric treatment before the Army pulled him from Walter Reed and sent him back to Fort Carson, Colorado where he was facing punishment. John continued to abuse pills, drugs, and alcohol and as a result was getting in trouble. John’s parents were concerned about his health again and fought for him to get transferred to San Diego for help and to be closer to them. John was prescribed a myriad of drugs to help him cope with the diagnosis of Post Traumatic Stress Disorder.  During this time, John sent a letter to the Army command at Fort Carson to report that he witnessed war atrocities while fighting in Iraq. An investigation was launched into the allegations yet the Army would determine that war crimes did not occur. Although John’s courts martial quietly went away and John was medically retired and discharged from the US Army. It would only be a few days later on September 1, 2008 that he would be accused of beating his girlfriend Jacqwelyn Villagomez to death with his bare hands. He was arrested for her murder, let out on bail, and awaiting trial for her murder when he learned that PTSD and Traumatic Brain Injury may be what led him to overreact and snap during the argument with Jacqwelyn.

In July 2009, ten months after Jacqwelyn’s death, John learned from the Department of Veterans Affairs that he did in fact have a Traumatic Brain Injury. John learned that the TBI can impact brain functioning including memory, speech, and hearing. He came to realize that combat changes who you are and that he may have suffered from a flashback when he attacked his girlfriend. According to witnesses Jacqwelyn became upset after she was asked to leave John’s home. As she was leaving one of John’s female friends stopped by which enraged Jacqwelyn. Jacqwelyn began beating the female friend who was able to escape and flee from the situation. While the friend was on the phone with the police reporting the incident, John was inside arguing and fighting with Jacqwelyn who herself was volatile. It was at this time that John snapped and beat Jacqwelyn to death with his own hands. He was discovered with swollen hands and bloodied after the vicious attack. The prosecution hoped to prove that John got drunk and killed Jacqwelyn in a drunken rage but John and his defense team hoped to prove that he suffered from a flashback, therefore he blamed both the Post Traumatic Stress Disorder and the Traumatic Brain Injury for the frenzied, animalistic attack. John was facing twenty-five years to life in prison for the murder.

In early 2010, as John’s trial got closer, John had another surgery to repair his back injuries from an IED explosion in Iraq. It failed and John continued to suffer with a high intensity of pain. According to his family, John could barely walk. John moved to Arizona for another surgery and to spend some time with his mom. He appeared happy to be back in the desert again. John’s brother drove from California to Arizona to spend some time with John. The next day, February 19, 2010, John’s brother discovered him clinging to life in his room. John’s brother attempted to save his life but John took his last breath in his brother’s arms and died at the age of 26. They would later learn that John died of an apparent overdose on painkillers. The autopsy was considered undetermined yet medical experts believe that the unusually high dosage of painkillers in John’s system could lead one to believe that John committed suicide. To this day it is unclear if John’s death was accidental or a suicide. John’s brother noted that it was ironic that he would make it through months of intense, deadly combat yet die once he gets home. There was no military funeral held for John but he was remembered for both the lives he saved in Iraq and the life he took when he got back home.

On this edition of DTRH Popeye covers the eleven year anniversary of the illegal, and immoral invasion of Iraq. He starts off by getting into the story of PFC John Needham, who witnessed war crimes being committed, and was locked up and tortured by his own command for not partaking in them himself. His story is an example of what happens when we “embrace the dark-side” as Dick Cheney put it in the push for the invasion. -DTHR