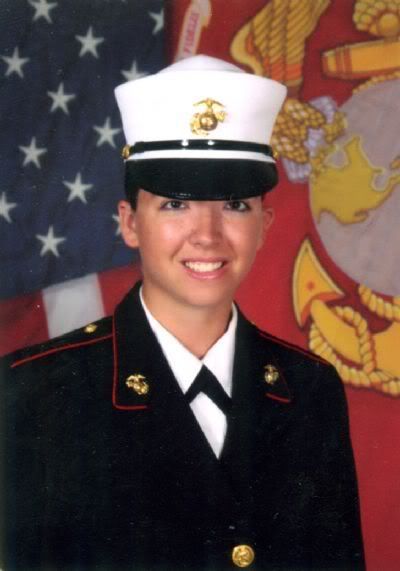 Marine Corps Lance Cpl. Stacy Dryden, 22, died of injuries sustained in a non-hostile incident in Anbar province, Iraq on October 19, 2008. Lance Cpl. Dryden was supporting Operation Iraqi Freedom on behalf of the 1st Supply Battalion, 1st Marine Logistics Group in Camp Pendleton, California. The Department of Defense announced that the incident was under investigation at the time of the press release. Media reports suggested that Stacy died of a suspected head injury she sustained during a wrestling match with a fellow Marine. In one report, a Marine public affairs officer stated that her manner of death has been ruled a homicide, but no wrongdoing was found and no charges were filed. The family expressed their frustration with the investigation of the murder of Stacy and additionally feel that no one was held accountable in an effort to protect the reputation of the Corps.

“They circle the wagons,” she says about how the military handled Maria’s murder and other female soldier deaths. “They are trying to protect their reputation.” And the military is protecting its reputation while struggling to recruit soldiers for an all-volunteer military. –City Beat (March 27, 2012)

Related Links:
DoD Identifies Marine Casualty
Legislation would commemorate Ohio Marine who died in Iraq
My Perspective on “Fragging” and Sexual Violence in the Military
Military Sexual Trauma: Is this how we treat women in the military?
Hiding Military Sexual Trauma
Fallen Angel: A North Canton soldier was found dead in Iraq. How she died depends on whom you ask
Is This How We Treat Our Female Soldiers?
Families seek answers about daughters’ “Non-Combat” deaths
Military rules in Marine’s death
Questions Are Discouraged When Women in Military Die, Pentagon seeks to spin, squelch stories on female fatalities
Marine’s father has questions about her death
Marines Probe Woman’s Death in Iraq
Canton Marine killed in non-combat incident in Iraq
Service members gather to honor fallen
Marine Lance Cpl. Stacy A. Dryden
Non Combat Deaths of Female Service Members in the U.S. Military (Iraq)
Military Policy and Legislation Considerations for the Investigations of Non Combat Death, Homicide, and Suicide of US Service Members