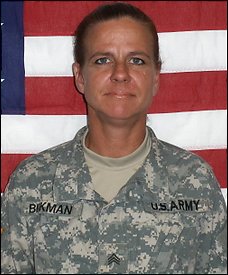 Army Sgt. Tracy Birkman, 41, died from non combat related injuries in Owesat, Iraq on January 25, 2008. Sgt. Birkman was supporting Operation Iraqi Freedom on behalf of the 626th Brigade Support Battalion, 3rd Brigade Combat Team, 101st Airborne Division (Air Assault) at Fort Campbell in Kentucky. At the time of the Department of Defense press release, the incident was under investigation which is typical of non combat death. But the official cause of death is unknown.

Birkman’s father, Jerald Griffith, a Vietnam War veteran, said he was angry with military officials for releasing information about his daughter’s death and with the news media for its portrayal of soldiers such as himself. “I didn’t want it released. I am so [furious] about all this I can just scream,” said Griffith, also of New Castle. “I hate the media with just an unmitigated passion. You . . . lied about me when I was in Vietnam.” He said his daughter was on her third deployment.” She’s over there in a war we shouldn’t even be involved in, on her third tour,” Griffith said. –The Washington Post (January 29, 2008)