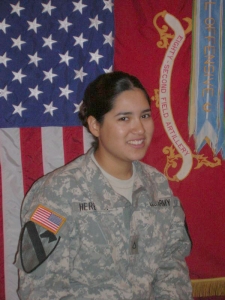 Army Spc. Marisol Heredia, 19, died September 7, 2007 at Brooke Army Medical Center in San Antonio, Texas of injuries suffered from a non-combat related injury on July 18, 2007 in Baghdad, Iraq. Spc. Heredia was a Petroleum Supply Specialist supporting Operation Iraqi Freedom on behalf of the 15th Brigade Support Battalion, 2nd Brigade Combat Team, 1st Cavalry Division at Fort Hood, Texas. At the time of the Department of Defense press release the circumstances surrounding the death were under investigation. According to media reports, Spc. Heredia was severely burned while refueling a generator in Iraq and died of an infection at the hospital stateside because her bodily defenses were seriously compromised due to the extent of her burns.

In war-torn Baghdad, Heredia, who held the rank of Specialist, was badly burned in an accident July 18. According to family members, the accident occurred while she was fueling a generator. –Los Angeles Times