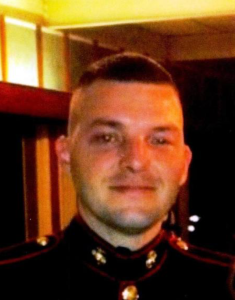 Marine Corps veteran Justin Eldridge was found dead of an apparent self-inflicted gunshot wound in his Waterford, Connecticut home on October 29, 2013. Justin served in the Marine Corps for 8 1/2 years. After a deployment to Afghanistan he battled with both Post Traumatic Stress Disorder and Traumatic Brain Injury. As a result he was medically retired from the Marine Corps in 2008. Justin was married with four children at the time of his death. Justin’s wife Joanna has continued the fight for our soldiers and veterans. Senator Richard Blumenthal (D-CT) honored Justin Eldridge on the Senate Floor and co-sponsored a veteran suicide prevention bill in his name. Joanna attended the 2015 State of the Union and a bipartisan suicide prevention bill was signed into law in March 2015.

His final message, posted on his Facebook Page at about 9 p.m., “theres only so much bashing someone can take before they react………” –Waterford Patch (October 29, 2013)