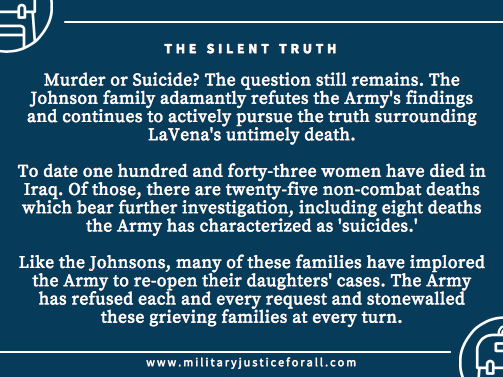 This is a small sample of the many soldiers that have died of non combat deaths, homicide, and suicide. It was hard for me to choose which ones to feature. Given the amount of families who have questioned a ruling of suicide while their loved one was serving in the US military, it’s fair to say that some suicide rulings should have a second look to determine if a homicide was ruled out. It’s important to note that if the cause of death is determined to be suicide, then the military never has to investigate again.

UPDATE: Moulton Introduces Brandon Act to Change DoD Mental Health Policy, Pay Tribute to Fallen Navy Sailor Brandon Caserta (June 25, 2020) *this could be the pathway to the request for an expedited transfer, their lives are more important than anything

Washington D.C. Veteran’s Presentation on the Current Status of Forces at Fort Hood in Texas (December 12, 2017)

15 Active Duty Cases That Beg for Prevention Efforts, Military Justice Reform, and the End of the Feres Doctrine

END_OF_DOCUMENT_TOKEN_TO_BE_REPLACED

Senator Kirsten Gillibrand stops by to talk about what she’s doing to protect our soilders from military sexual assault. Find out why she’s getting support from both sides of the aisle and tune in to hear from a survivor. -Katie Couric (November 19, 2013)

Senators Rand Paul and Ted Cruz joined the New York Democrat in support of taking the chain of command out of military sexual assault cases. -The Washington Examiner (February 18, 2014)

Senator Ted Cruz speaks out in support of a military sexual assault bill that was blocked in the Senate. -CNN (March 6, 2014)

Senator Kirsten Gillibrand is reaching across the aisle to prevent military officers from reaching into their subordinates’ pants. #passMJIA -Full Frontal with Samantha Bee (June 7, 2016)