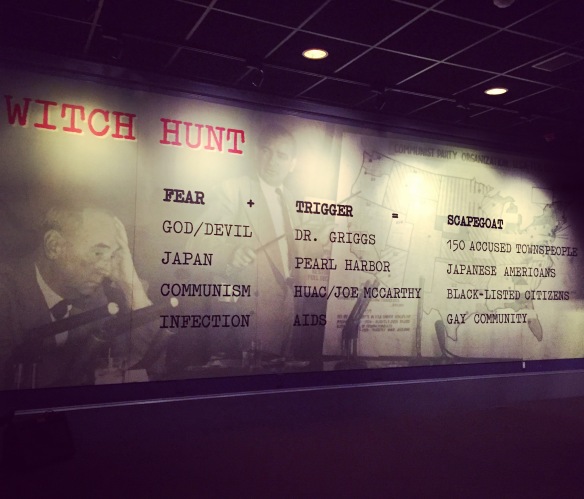 History of  Witch Hunts in America, located at the Salem Witch Museum, Massachusetts

Society has a tendency to respond in a crisis oriented fashion to a moral panic. After “The Invisible War” gaslighted America, all women soldiers were victims and all male soldiers were predators. This has been a repeated cycle after every sexual assault scandal. The media narratives reflect this and continue to perpetuate the myths typically choosing a blonde white female as the ‘victim’. But that’s not how it works in real life and male victims of crime in the military set both the filmmakers and the media straight. The momentum died off so they created another film about college sexual assault and tried again creating a female versus male division. No one really knows the statistics at the college campuses but in the military, the majority of victims of sexual assault and homicide are men. We care about the men just as much as we care about the women. We care about facts and evidence and have learned that the devil is in the details.

In this video, a former D.A. (now criminal defense lawyer) explains the law of rape, penalties and sentencing, and common legal strategies to fight the case. Each year, countless innocent people get wrongfully arrested for rape and sexual assault. Sometimes there was a genuine misunderstanding between the accuser and the accused as to the issue of consent. Other times, the alleged victim makes up false allegations out of anger, jealousy or spite towards the accused. A conviction for Penal Code 261 can bring years, sometimes life in prison. It’s important in these situations to have an attorney and defense investigator who can scrutinize the background of the accuser and expose a fabricated story for what it it.

“Capt. Howard Levy, 30, a dermatologist from Brooklyn, is convicted by a general court-martial in Fort Jackson, South Carolina, of willfully disobeying orders and making disloyal statements about U.S. policy in Vietnam. Levy had refused to provide elementary instruction in skin disease to Green Beret medics on the grounds that the Green Berets would use medicine as ‘another tool of political persuasion’ in Vietnam.” Read more from This Day in History here.

Related Links:
1967 Press Photo Howard Levy
Captain Howard Levy
My Visit With Capt. Howard Levy
ACLU History: The Military
GI opposition to the Vietnam War, 1965-1973
Timeline of the G.I. Antiwar Movement
Parker v. Levy (1974)
Vietnam War | National Archives
Green Berets End Testimony in Levy Case
The Press of Peace
The Trial of Captain Levy: II
Court Rejects Cases Challenging Legality of the War
A system of law, tried and found guilty
Vietnam: Where Are They Now?
Following Up | The New York Times
The Real Story of Vietnam Veterans Against the War
Sir! No Sir! | Seattle Weekly
How GI Resistance Altered The Course Of History: “Sir, No Sir,” A Timely Film
Watada, the War and the Law | The Nation
Super Troopers | Village Voice
Back to ‘nam: Cinema looks at the USA’s other hated war
Fonda’s antiwar years are being lived anew
New life for anti-war film Pentagon suppressed
Civil rights-era lawyer for Bond, Ali dies in Fla.
Charles Morgan Jr., 78; was famed civil rights era lawyer
A Memorial Day Remembrance of Peace Activist Soldiers
Please Don’t Thank Me For My Service
The GI Revolt That Ended the Vietnam War
Attica hostages died of gunshots, not cut throats as originally reported in 1971
NY Times Belated obituary for ex-Green Beret, antiwar activist Donald Duncan
Vietnam and the Soldiers’ Revolt
Opinion: Honoring GIs and veterans who fought for peace in Vietnam
I’m Pretty Sure Sergeant Greenwald Tried To Kill Me.
The Look Magazine article from 1968
Vietnam Vets Return to My Lai, Where US Slaughtered 500 Civilians
The Vietnam War and the US Soldiers’ Revolt
Reflections on the Anti-War Documentary, Sir! No Sir!
Dr. Howard Levy Refuses Orders Over Vietnam War; Charges U.S. War Crimes
War Crimes and Vietnam: The “Nuremberg Defense” and the Military Service Resister
Vietnam War on Trial: The Court-Martial of Dr. Howard B. Levy
May 10, 1967: Army Captain Howard Levy Refuses to Train Green Berets During Vietnam War
The Court-Martial of Captain Levy: Medical Ethics vs. Military Law
Book: Sir! No Sir! – The Suppressed Story of the GI Movement to End the War in Vietnam
Movie of the Month: Sir! No Sir! | Portland Public Library
Movie: Sir! No Sir! | The New Yorker