HRW claims in their report that many service members lose their military career after being sexually assaulted & they have discharge papers that prevent them from getting health benefits.

DoD rejected the conclusions of the HRW report.

DoD states “they have many victims of sexual assault who receive honorable discharges from the military. There is a policy in place that offers assistance for anyone that reports a sexual assault. It is critical every survivor is treated with sensitivity that they deserve.”

Media states that victim was raped multiple times while serving her country and that they contacted the DoD and Army about her case, a case from 15 years ago.

She states that she was military intelligence, had lots of prescreening prior to enlistment. Promising path, requested by Chain of Command to apply to West Point. After first rape in military, her promising path turned to being retaliated against, and there were two more rapes for reporting the rape. It ended career with an illegal, bogus, discharge. Decade and a half later, still fighting to correct it.

END_OF_DOCUMENT_TOKEN_TO_BE_REPLACED 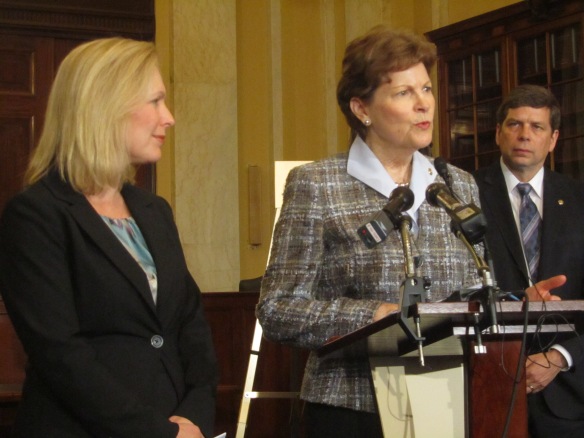 Sen Kirsten Gillibrand (D-NY) stands by Sen Jeanne Shaheen (D-NH) at the introduction of the Military Justice Improvement Act (May 16, 2013)

Sexual assault: Women lawmakers push for change in US military

“Sexual assault in the US military is accelerating toward likely change in the way such cases are handled by senior uniformed officers – which is to say, it may be taken out of their hands. It’s a function of changing public attitudes regarding military service and sexual misconduct beyond ‘he said, she said’ – given greater strength by the growing ranks of women in senior elected positions.

In Congress, women lawmakers are leading the charge, pushing legislation that would take the authority to investigate and punish instances of sexual assault out of the chain of command, away from commanding officers whose potential conflict of interest may favor the military’s ‘good order and discipline’ as it applies to unit cohesion and war-fighting ability over vigorously prosecuting sexual offenders in the ranks, including fellow officers.”

“The Pentagon has announced new steps to deter assaults and make it easier to prosecute offenders, a move that follows President Obama’s recent remark that sexual assault “has no place” in the U.S. military.

Still, many victims believe it will be difficult to change a military culture that makes it tough for the victims to report these crimes. For victims, the nightmare starts with the attack. Many say that things get worse when they try to do something about it.”

“We anticipate maybe about 14 or 15 percent of people who have been sexually assaulted come forward to report.” -Air Force Maj. Gen. Mary Kay Hertog