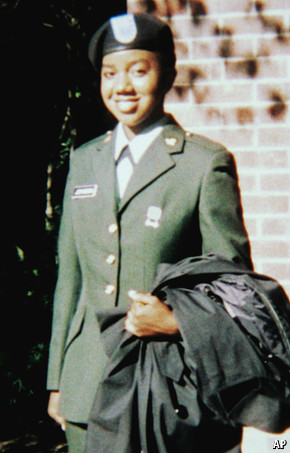 Editors Note: Need to get up to speed quick with the unsolved case of Fort Campbell Army Pfc. Lavena Johnson, please check out Episode 40 on the Military Murder Podcast.

Army Pfc. LaVena Johnson, 19, died of non combat related injuries in Balad, Iraq on July 19, 2005. Pfc. Johnson was supporting Operation Iraqi Freedom on behalf of the Army’s 129th Corps Support Battalion in Fort Campbell, Kentucky. Unlike most, the Department of Defense did not announce that LaVena’s death was under investigation in their press release. The Army Criminal Investigation Division later determined that Pfc. Johnson’s cause of death was suicide by self inflicted gunshot wound. The Army tried telling the family that LaVena used her own M-16 to commit the suicide. The family immediately suspected foul play and ordered an independent autopsy for LaVena. LaVena was not depressed and showed no signs of suicidal ideation. As a matter of fact, she was happy and bubbly and looking forward to going home for Christmas. After the family saw LaVena’s body and obtained investigative documents from the Army, they quickly realized that LaVena did not die by suicide, she was raped and murdered.

According to the family, the Army never investigated LaVena’s death as a homicide nor did they do a rape kit test or autopsy. The family gleaned from the paperwork that Army investigators first considered LaVena’s death a homicide and recorded that in their paperwork, but within a short window of opportunity were suddenly ordered to cease their investigation and reclassify her death as a suicide. Ten years later, LaVena’s father, Dr. John Johnson, continues to fight for justice for his daughter. And, although he has had struggles getting media coverage, he has forged out on his own to speak the truth for LaVena. Dr. Johnson is featured in a documentary called The Silent Truth which presents the heartbreaking story of his daughter LaVena. Pfc. LaVena Johnson was betrayed by the very people she depended on for her life, and the military industrial complex who would rather silence the truth then harm their reputation.

Nineteen year-old Army PFC LaVena Johnson, was found dead on a military base in Balad, Iraq in 2005. The U.S. Army ruled Lavena’s death a suicide, but an autopsy report and photographs revealed Johnson had a broken nose, black eye, loose teeth, burns from a corrosive chemical on her genitals, and a gunshot wound that seemed inconsistent with suicide. LaVena’s father, John Johnson, shares his family’s fight to get answers from the military about his daughter’s death. -Protect Our Defenders (July 14, 2012)

Many have heard about the efforts for justice in the case of Army PFC LaVena Johnson. In 2005 after only 6 weeks of her deployment in Iraq, PFC LaVena Johnson was found dead. The Army says suicide, but after close evaluation and discovering a plethora of discrepancies in the Army’s report, LaVena’s father Dr. John H. Johnson began the fight for justice for his daughter. On this episode of The Rock Newman Show our special guest are LaVena’s father, Dr. John H. Johnson and attorney Donald V. Watkins. We warn our viewers that this episode of The Rock Newman Show goes into deep detail concerning the evidence and death of PFC LaVena Johnson. Dr. John H. Johnson and Donald V. Watkins contend that by no means is this case a suicide, and say they even know the name of the culprit. -The Rock Newman Show (February 11, 2016)