I write to you as a victim of crime in the military and as a military crime historian. I have researched the US military’s crime problems for the last 10 years and have documented as much as humanly possible on my Military Justice for All website. I have over 1000 cases of suspicious deaths, homicide and missing cases. Fort Hood has been problematic for years. I visited both Senator Collins and Senator King in DC to warn them about the problems at Fort Hood in December 2017 and to ask them for their help. It fell on deaf ears. Much like Vanessa Guillen, I too was afraid to report sexual harassment and sexual assault for fear of retaliation. I didn’t report until my supervisor in the Chain of Command attempted to force himself on me. Prior to this incident, I experienced daily sexual harassment and he would give me assignments that isolated me so he could do it with no witnesses.

Rep. Sylvia Garcia is asking that the DoD IG do an investigation of the circumstances that led up to the murder of Vanessa Guillen at Fort Hood. I am asking you to support her and all of our service members by adding your name to the list of representatives who support these efforts. Fort Hood leadership has failed time and time again and it’s due time that someone take a look at this problematic base. It’s a sad day when we lose 133 servicemembers stateside to violent crime, suicide, and training accidents compared to 2 combat deaths and 4 insider attacks overseas since 2016.

I also ask that you support legislation such as the Military Justice Improvement Act to give our service members a chance to report unsafe situations to an independent authority outside the Chain of Command. As long as service members are fearful of retaliation (which is very real and the reason I have compounded PTSD), we will continue to see high rates of PTSD, murder and suicide on military bases. According to authorities, Vanessa Guillen was murdered because she was planning on reporting someone she worked with for adultery, and this same individual may also have been sexually harassing her. It is unclear at this time who sexually harassed her but she told her family she was scared and feared reporting the sexual harassment to the Chain of Command because it wasn’t taken seriously and she feared retaliation.

Over the years, I have realized that most don’t realize what it’s like to be enlisted and this still rings true. Imagine how powerless we feel as lower enlisted when someone higher ranking than us can literally get away with crime because they are part of the reporting mechanism or they simply don’t care. While Congress sits on their hands, veterans are flocking to the VA to file PTSD claims and military families are grieving the loss of their loved ones whether it be by murder or suicide. I understand why someone might take their own life when they feel trapped and have no way out. 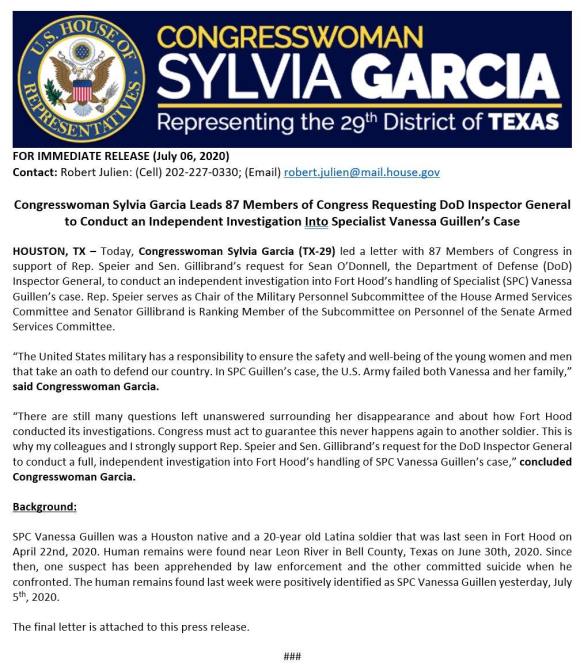 The Department of Defense Inspector General’s office held a Worldwide Hotline Outreach Conference today July 28, 2016. One of their keynote speakers was Lt Col Teresa James, US Army, Retired, highlighted before on this site. The DoD IG twitter feed shared excerpts from her presentation summarized below. As she spoke, I tweeted with them to bring awareness to the specifics that Lt Col James noted and why they are so important. For a complete listing of the tweets by the DoD IG, please visit their Twitter feed here.

END_OF_DOCUMENT_TOKEN_TO_BE_REPLACED

“One of the women interviewed was Lt. Col. Teresa James, the highest ranking officer to come forward with a rape claim in the National Guard, according to a recent report by the Guard. The News4 I-Team first brought you her story when she said she believes her 34-year military career with the West Virginia National Guard was destroyed after she reported her rape. Lt. Col. James attended the news conference and told the I-Team, ‘There’s nothing else they can do to hurt me. They did everything they could possibly do. It’s effecting change. That’s why I’m out today. It’s effecting change, and if I have to speak it, shout it from the rooftops, that’s what I’m going to do.’ Read more from NBC Washington here.

Follow MILITARY JUSTICE FOR ALL on WordPress.com
Join 241 other followers