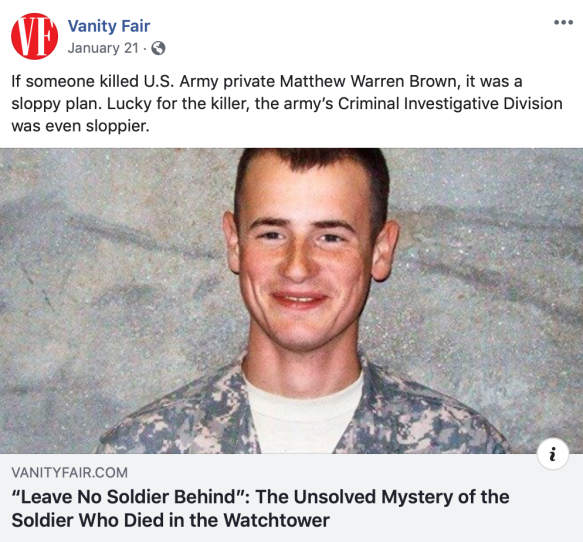 Is the Army botching its investigations into noncombatant deaths?

I. The Gun Tower

“On the morning of May 11, 2008, a U.S. Army private second class named Matthew Warren Brown died of a single gunshot wound to the head while manning a watchtower at a forward operating base in Afghanistan. Brown was 20 years old. He was a skinny, all-American kid, a bit aimless but affable and unassuming. He was a good guy. You could see it in his face. At his funeral back home in Pennsylvania, some 200 people showed up. In the aftermath of Brown’s death, army investigators created files about the circumstances. The bullet that killed him was fired from his own weapon, an M4 carbine. He was working the six A.M. shift, alone in the watchtower by the fortified main gate to the base. The tower was known as the Gun Tower. It was made of concrete, and looked medieval when viewed from the outside. It was three stories tall. On the second and third floors it had openings covered with two-piece Plexiglas windows, some of which had broken off and been left lying in shards on the floors.” Read more from Vanity Fair here.