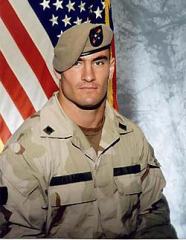 In the Name of Pat Tillman: Good Riddance to Stanley McChrystal

When NFL player-turned-Army Ranger Pat Tillman died at the hands of US troops in a case of “friendly fire,” the spin machine at the Pentagon went into overdrive. Rumsfeld and company couldn’t have their most high-profile soldier dying in such an inelegant fashion, especially with the release of those pesky photos from Abu Ghraib hitting the airwaves. So an obscene lie was told to Tillman’s family, his friends and the American public. The chickenhawks in charge, whose only exposure to war was watching John Wayne movies, claimed that he died charging a hill and was cut down by the radical Islamic enemies of freedom. In the weeks preceding his death, Tillman was beginning to question what exactly he was fighting for, telling friends that he believed the war in Iraq was ” [expletive] illegal.” He may not have known what he was fighting for, but it’s now clear what he died for: public relations. Today, after five years, six investigations and two Congressional hearings, questions still linger about how Tillman died and why it was covered up.

Read more from The Nation here.