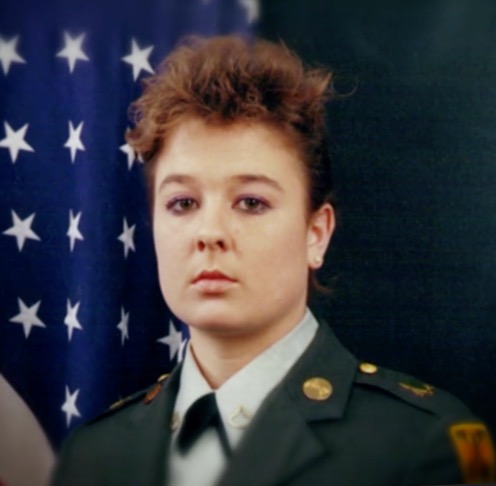 Army Soldier Erin Tynan, 21, was found dead on November 15, 1990 in her off base apartment in Barstow, California. Erin Tynan was an active duty military police officer stationed at the Fort Irwin National Training Center. She had already spent a couple years in Germany and after her enlistment was up, she was going to use her GI Bill to go back to school and get a degree in forensic social work. After she didn’t show up to work, the Army asked the Barstow Police Department to check in on her because they were concerned about a respiratory medical condition she had been diagnosed with in Germany. The Barstow Police Department went to Erin’s home and found her dead at the scene.

Barstow PD detectives determined that Erin had been the victim of a surprise sexual attack and murder. They deduced that whoever killed Erin was someone that she knew and the person was able to gain access inside her apartment and overpower her. The autopsy confirmed that Erin was assaulted, forcibly raped, strangled, and stabbed in the neck post mortem. Investigators believed that the precision stab wound in the back of the neck was the work of someone who served in the military and wanted to make sure she was dead. They first turned to Erin’s last known boyfriend William Jones. He had recently been discharged from the Army and left the day before but there was tension because the six month relationship ended. Jones informed investigators that he had left Erin with a 22 pistol for protection but she was planning on selling the gun to another Army soldier because it jammed. They did not locate the gun in Erin’s apartment and believed the killer stole the gun. Jones was eventually ruled out because his DNA did not match the DNA found at the crime scene and he was in fact physically placed in Illinois at the time of the murder. The next person they turned to was a lead they got from the Army Criminal Investigation Division (CID). CID learned that another soldier by the name of Eugene Knox was in possession of a 22 pistol and had been acting erratically. The Barstow PD spoke with Knox and learned that he had been dating Erin. No one knew the two were seeing one another. Investigators determined that Knox could not have been the killer because he was out in the field on the night of the murder.

A couple years later, evidence from an attempted murder of a young mother in Louisiana was linked to evidence in a murder case in California. The young mother had been shot in the face once with a 22 pistol but her life was spared when the gun jammed the second time the killer pulled the trigger. The murder victim, Curtis Dean, had also been stabbed in the neck in the same precise way that Erin Tynan was stabbed in the neck. The suspect in the murder of Curtis Dean was an Army soldier at Fort Irwin, Christopher Geier. Army CID immediately recognized the similarity in the knife wounds found on both Curtis Dean and Erin Tynan. They contacted the Barstow PD to inform them of what they had learned. Geier admitted to investigators that he was hired to murder Curtis Dean but did not admit to the rape and murder of Erin Tynan when confronted. But it didn’t matter because in the meantime forensic testing revealed the gun used to shoot the young mother in Louisiana who survived matched the 22 pistol missing from Erin’s apartment. And the British Commando knife Geier admitted using on Curtis Dean was consistent with the knife used on Erin Tynan. Hair samples and DNA evidence collected from the rape also matched Geier. The prosecutor determine based on evidence collected at the scene that Geier knew that Erin Tynan would be alone and vulnerable that night. He also knew that her boyfriend Billy Jones was gone. He used the ruse to buy the pistol to gain access into her apartment with one thing in mind: he wanted a sexual encounter with her. After she resisted and rejected him, he raped and strangled her.

On July 21, 1995, Christopher Adam Geier was sentenced to death for the first degree murder of Erin Tyner and Curtis Dean, and the attempted murder of the young mother in Louisiana. Investigators eventually learned that Geier’s Fort Irwin Tank Commander in the Army, Jeffrey Hunter, hired him to kill Curtis Dean. Army soldier Jeffrey Hunter was sentenced to life in prison.

Update: On August 31, 2017, Christopher Geier, 49, collapsed and died in the prison’s recreational yard. The cause of death is unknown, pending the results of an autopsy.

The discovery of a beautiful military police officer murdered in her own home sends police on a twisted journey for answers. -Blood and Betrayal, On the Case with Paula Zahn (S14,E5)